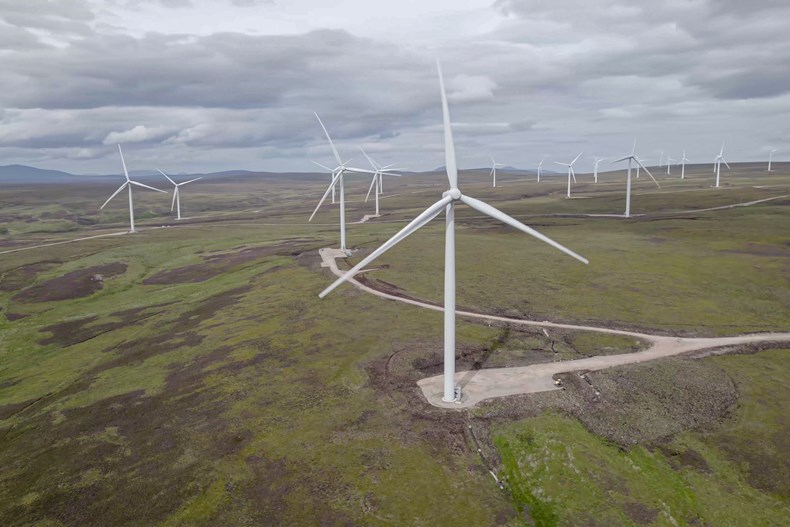 Under the new plans, green hydrogen would be produced by SSE Renewables at Gordonbush wind farm using Siemens Gamesa’s Renewable Hydrogen Upgrade solution. The green hydrogen could then be used as a clean alternative to petrol, diesel or natural gas to help decarbonise hard-to-abate sectors such as industry, transport and manufacturing. The move follows last year’s agreement between both companies to explore opportunities to produce green hydrogen on co-located onshore wind farm sites.

Hydrogen is fast being recognised as having a potentially revolutionary role to play in helping Scotland and the UK reach net zero carbon emission targets. While other fuels such as petrol, diesel or natural gas produce harmful carbon dioxide emissions when used, hydrogen emits only water vapour into the atmosphere.

The production of green hydrogen takes the opportunity a step further. It uses zero carbon electricity from renewable sources such as wind power to separate water into its component parts of oxygen and hydrogen in a process called electrolysis. The hydrogen produced as a result can then be stored and distributed to potential transport, heating and manufacturing customers.

The plans unveiled today by SSE Renewables would see the integration of Siemens Gamesa’s Renewable Hydrogen Upgrade at its Gordonbush site near Brora, comprising electrolyser and ancillary technology. The facility would be capable of producing up to 2,000 tonnes of green hydrogen each year using wind energy generated at Gordonbush, helping the UK and Scottish Governments in reaching their net zero targets, while supporting the UK’s goal of hitting 5 gigawatts (GW) of low carbon hydrogen production by 2030.

The overall development would also include a battery energy storage system which would be capable of storing any surplus, or constrained, renewable energy produced by the wind farm at times of excess wind on the electrical grid. This would allow such excess green energy to be stored in lithium-ion batteries for possible later use, including the potential to power the electrolyser for green hydrogen production or to dispatch to the national grid at times when the wind is not blowing. Deployed at scale, the technology can help balance the grid by smoothing out the natural variability of wind – meaning wind power can provide both clean and secure energy supplies.

The project will also see SSE Renewables working to explore opportunities to unlock the full potential of the green hydrogen value chain in the Scottish Highlands and support Scotland’s emerging green hydrogen economy. This will include working with potential green hydrogen customers from high carbon sectors looking to decarbonise their energy and fuel supplies.

“Green hydrogen produced from renewable sources such as wind energy has the potential to play a revolutionary role in decarbonising power production, heavy industry and transport, as part of our journey towards net zero emissions.

“Combining electrolyser and battery technology with wind farms could be a game changer in solving the renewables variability challenge and shows the potential for wind power to help enhance energy security by reducing our reliance on imported gas. As an integrated group, SSE has a view across the whole energy value chain and is uniquely positioned to deliver.

“With this development at Gordonbush, we’ll be able to divert some of our abundant wind resource in the Highlands to begin production of a locally-sourced low carbon fuel for transport and heavy industry, develop a green hydrogen supply chain to support local job creation, and play our part in supporting Scotland’s emerging green hydrogen revolution.”

“We’re excited to work together with SSE on our journey to unlock the green hydrogen revolution and deliver the fuel for the future. We believe that green hydrogen is an outstanding technology for transferring the benefits of renewables beyond the electricity sector. Green hydrogen will be key in the decarbonization of hard-to-electrify, and thus hard-to-abate, sectors. Green electricity can be transformed into a transportation fuel, or used as feedstock in industrial processes, where currently no climate-neutral alternatives exist. It will play a crucial part in reaching our net-zero goal for 2045.”

SSE Renewables has recently submitted a screening request to The Highland Council to consider its plans for the proposed development. A local public consultation will also be held in April to gather community and stakeholder feedback on the proposal which will help inform final detailed project designs. A final planning application for the proposed electrolyser development is expected to be submitted to The Highland Council in Summer 2022 while a separate application is expected to be made to the Scottish Government Energy Consents Unit later this year for the associated battery energy storage system. Further public information on the project can be found at GordonbushH2.

With an operational renewable portfolio of 4GW and a development pipeline of around 11GW of new onshore and offshore renewable projects, SSE Renewables is well placed to provide the future renewable power needed to power a green hydrogen economy.

Siemens Gamesa is a world-leading supplier of on- and offshore wind turbines and services and is also developing innovative wind-to-hydrogen technologies and asset optimisation solutions, playing a pivotal role in the energy transition. Siemens Gamesa has already successfully collaborated to bring a hydrogen production facility into operation where hydrogen is produced from an onshore wind project. The Brande Hydrogen pilot site in Denmark features a battery, a turbine and an electrolyser to serve as a test bed for several technology pathways, including the production of green hydrogen in the near-term from existing wind projects.

The operational Gordonbush Wind Farm and the recently completed Extension are situated in an area between 2km north west and 10 km west of Brora. Gordonbush Wind Farm first entered commercial operation in 2012, while the Extension was officially opened in Summer 2021 by Scotland’s Cabinet Secretary for Net Zero and Energy, Michael Matheson, making it one of Scotland’s newest onshore wind farms.

Gordonbush comprises a total of 46 onshore turbines, including 11 of the latest Siemens Gamesa turbines forming the extension to the site, generating up to 108 megawatts (MW) of wind-powered electricity, enough renewable energy to power over 105,000 Scottish homes each year*. Over its expected 25-year lifetime, Gordonbush Wind Farm will typically save over 120,000 tonnes annually of harmful carbon dioxide emissions, helping Scotland and the UK to transition towards a Net Zero carbon future**.

*Gordonbush and Gordonbush Extension are capable of powering the equivalent of 105,362 homes once fully operational (based on latest Ofgem calculations).

**Based on Scottish Government recommended methodology.