New Hydrogen Multi-Modal Transport Facility to Be Developed in Galway

Galway – 14th April 2022: Ireland’s first Hydrogen Valley was announced today by An Taoiseach, Micheál Martin TD., who was speaking at a conference hosted by the Port of Galway, on the subject of the Renewable Energy Opportunity in the West of IrelandThe Galway Hydrogen Hub (GH2) is a consortium consisting of seven members - NUI Galway, the Port of Galway, CIÉ Group and Bus Éireann, Aran Islands Ferries, Lasta Mara Teo, Aer Arann Islands, and SSE Renewables. 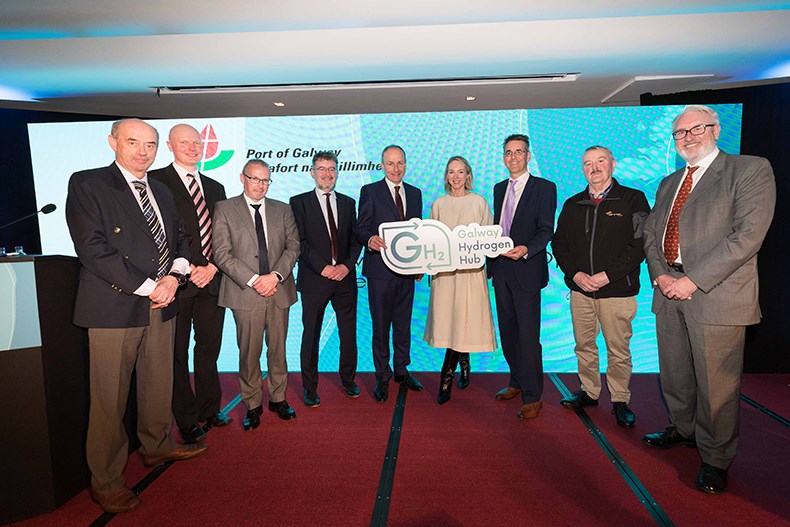 GH2’s proposal is to develop a Hydrogen Valley in the Galway region, similar to those launched in other European countries. A Hydrogen Valley is a regional ecosystem that links hydrogen research, production, distribution, and transportation with various end users such as transport and industry. The utilisation of indigenous renewable hydrogen at Hydrogen Valleys is considered an important step towards enabling the development of a new hydrogen economy.

GH2 will position Galway as the home of Ireland’s first Hydrogen Valley, providing green hydrogen for use in transport, industry and within local communities in the greater Galway region.

The GH2 consortium’s intention is to develop an initial flagship demonstrator project at Galway Harbour, for the indigenous production and supply of clean green hydrogen fuel for public and private vehicles. This will include buses and trucks and deliver a multi-modal, zero emission, renewable hydrogen transport hub that can be easily replicated across Ireland.

The intended hydrogen transport hub could be expected to be fully operational by the second half of 2024 and today’s announcement marks a significant development in the potential for the production and delivery of indigenous renewable fuel for both the domestic and export markets. This would demonstrate Ireland’s potential as a major producer and exporter of hydrogen.

The development of the country’s first Hydrogen Valley is another step forward in positioning Ireland at the strategic centre of renewable energy generation and energy sector integration. Green hydrogen can provide security of energy supply, assist in countering long-term energy price fluctuation, and make a significant contribution to reducing Ireland’s greenhouse gas emissions.

Lorcan O’Connor, Group Chief Executive, CIÉ said: “Sustainability and decarbonisation are at the heart of public transport.  As the CIÉ Group is by far the country’s largest public transport provider, we are delighted to work with our partners in the GH2 consortium to ensure we are at the forefront of the opportunity hydrogen fuel will provide in meeting both our own decarbonisation targets, and those of the State.  It will ensure we have explored a complementary mix of zero emissions technologies, with the current focus on electrification, to power low carbon transport and meet our 2030 targets and net zero target by 2050.   What we develop and learn in this innovative partnership in Galway could be transformative for sustainability in the transport sector as a whole.”

John O’Sullivan, SSE Renewables’ Project Manager for GH2 said: “Our consortium has come together with the objective of not only using green hydrogen to realise new renewable energy solutions for Ireland but to also deliver the country’s first Hydrogen Valley. Green hydrogen is gaining global recognition as a means of decarbonising heavy duty and long-distance transport as well as industry. The development of Ireland’s first Hydrogen Valley in Galway Harbour will allow us to utilise indigenous renewable energy to produce green hydrogen for use by local air, sea, road and rail transport alongside industry. As part of the integrated SSE Group, SSE Renewables has a view across the whole energy value chain and so is uniquely positioned to deliver this green hydrogen solution for the consortium, helping to kickstart the development of a new hydrogen economy in the West of Ireland.”

Dr Rory Monaghan, Senior Lecturer of Energy Systems Engineering at NUI Galway, said: “The future sustainable growth of our region will depend in large part on the availability of secure indigenous renewable energy. We are witnessing huge strides in the greening of our electricity grid with wind, but we use twice as much energy for transport, almost all of which is imported fossil fuel. The key innovation of GH2 is the use of wind to drive a zero emission, multi modal transport sector.”

Green hydrogen is produced when renewable electricity is used to split water into its component parts of oxygen and hydrogen through the process of electrolysis. While other fuels such as petrol, diesel or natural gas produce harmful carbon dioxide emissions when used, hydrogen emits only water vapour into the atmosphere. Once produced, it can be compressed or liquefied, enabling large quantities of renewable energy to be transported long distances and stored for up to months at a time, potentially transforming the outlook for renewables rich countries like Ireland.

Green hydrogen can be used as a zero emissions fuel in applications that are too difficult to electrify directly, including vehicles like buses, trucks, planes and ships, and energy intensive industries like the production of steel, cement, fertilizer, and chemicals. Most energy analysts recognise green hydrogen as crucial to making the cuts in greenhouse gas emissions needed to avoid the worst effects of climate change, while reducing the need to import fossil fuels.

In the coming weeks, full details of the project will be announced, along with details of a public consultation as part of the planning process for the project.