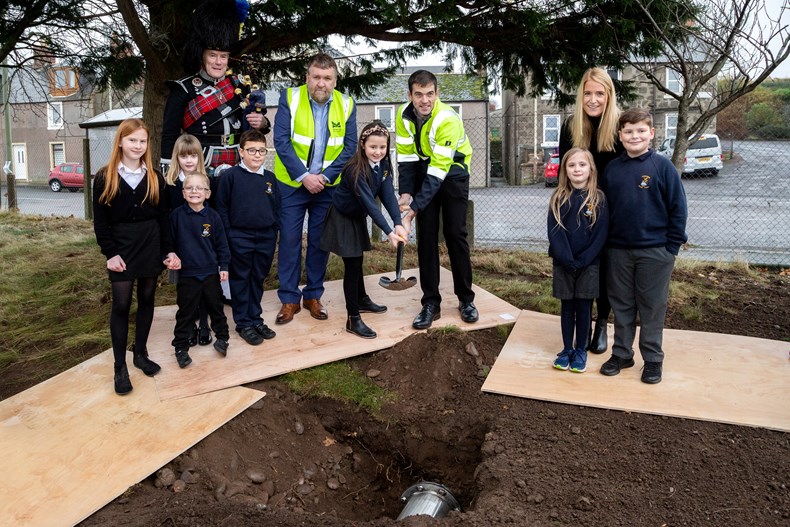 Children from Ferryden Primary School in Montrose helped bury a time capsule at the town’s port to mark a milestone for Seagreen Wind Farm.

Montrose Port Authority and Seagreen Wind Energy Limited has marked St Andrew’s Day with the burial of a time capsule celebrating a major milestone in a development serving what will be Scotland’s biggest offshore wind farm, 27 kilometres off the coast of Angus.

Pupils from Ferryden Primary School were tasked with selecting items to be buried in the capsule and unearthed in 25 years’ time – the minimum lifespan of the new Seagreen offshore wind farm.

To mark the occasion, local bagpiper Norman Fiddes led the children from the harbour office to the time capsule location next to Seagreen’s soon-to-be-opened operations and maintenance base.

Items placed in the capsule include symbols of the pandemic such as hand gel and face masks, as well as artwork, video clips, toys, newspapers and a Ferryden school jumper.

The project highlights the commitment of Seagreen’s joint partners SSE Renewables and TotalEnergies, and Montrose Port Authority to ensure a lasting community benefit from the £3billion wind project.

In addition to the time capsule, pupils from schools across Montrose were also invited to suggest names for the new Seagreen Operations and Maintenance (O&M) building on the Port’s South Quay and it was a Ferryden pupil who came out on top.

As suggested by P5 pupil Lilly Hill, once operational the building will be known colloquially as ‘Windy Waves House’ and as a token of appreciation for all their hard work on the names and time capsule, every pupil of Ferryden Primary and the school’s nursery will be presented with a book token from Montrose Port Authority and Seagreen.

"We were delighted to have the pupils from Ferryden here to mark the burial of the time capsule - the suggestions they came up with were fantastic and really provide a glimpse into life in 2021.

Having Seagreen’s O&M base at Montrose will bring 25 years of prosperity to the Angus region and I am delighted that our young people, many of whom will go on to have careers in the renewable energy sector, are already starting to benefit from this partnership. I hope that in 25 years’ time, Montrose continues to be a centre of excellence for new and exciting technologies."

The time capsule project follows on from an educational activity pack focusing on renewable energy which was created jointly by Montrose Port Authority and SSE Renewables and distributed to all schools in Angus and south Aberdeenshire.

"We are committed to the communities that we live and work in, so it is an honour and a pleasure to have worked with Montrose Port and Ferryden Primary School on this project.

The time capsule signifies a moment in history like never before and no doubt in 25 years’ time when the capsule is opened it will give the future residents of Montrose a glimpse into an era when renewable energy was in its infancy – a time when despite the challenges of a global pandemic, our workforce and our industry continued to deliver a major project which will hopefully have made net zero carbon emissions a reality.

We hope that the children have enjoyed making their contribution and who knows, perhaps some of them be inspired to pursue a future career at the Seagreen Wind Farm in the future." 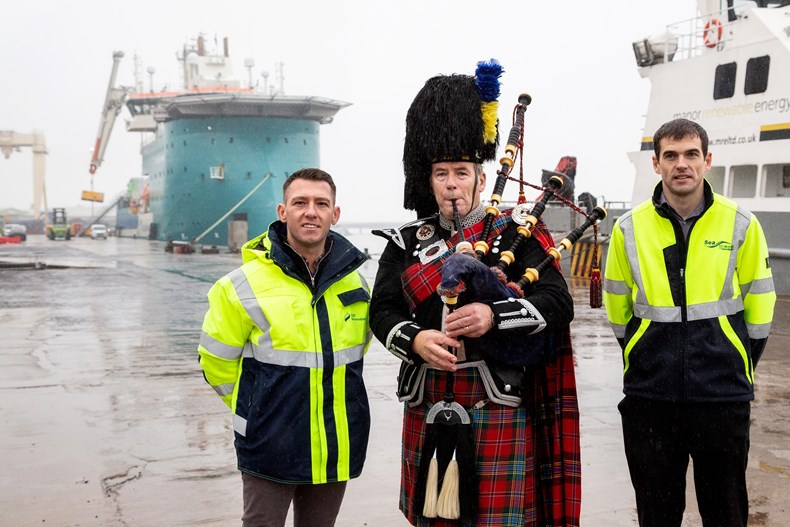 Also at Montrose Port, was the Service Operation Vessel (SOV) ‘The Acta Centaurus’ which will head out to the Seagreen Wind Farm site on Wednesday 1 December. The vessel will support Vestas as the company installs Seagreen’s 114 new 1,075MW turbines.

The vessel was delivered in May 2019 as an offshore support vessel, to support during the execution phase of several offshore wind projects.

Most notably, the vessel has supported the Deutsche Bucht, Borssele III/IV and Moray East projects. The vessel is among the best-in-class in walk-to-work offshore operations during wind project construction and service, with its crew transfer system.