A Platinum milestone for Pitlochry

Pitlochry Dam and Clunie Power Station are celebrating their 70th anniversary. To mark the anniversary, SSE Renewables Head of Operations, Jeremy Williamson writes about the rich history of these giants of hydro power...

A popular landmark with people in Scotland and tourists alike, Pitlochry Dam took four years to build and started generating in 1950.

Famous for its fish ladder, the popular attraction continues to be fully working with the station’s two turbines meeting the energy needs of some 15,000 homes today, more than seventy years on from when it started generating power.

Seven decades ago in a post war Britain, towns and cities were still showing the scars of war. There was little joy for a lot of families trying to borrow money; rationing was still in place and there were housing shortages for many, but, some areas were recovering. The year was 1951 and the first Grand Prix at Silverstone took place; the pilot series of the Archers was aired; the Kenwood chef made its first appearance and ‘A Streetcar Named Desire’ was released on film.

A little further back, mid-war in 1943, the Hydro-Electric Development Bill (Scotland) was passed through Parliament setting in motion a venture that would change the face of the highlands forever. Our predecessor, the North of Scotland Hydro Electric Board (NoSHEB) was set up and started its role of driving the electrification of the north of Scotland, a responsibility which would last  for the next two decades. 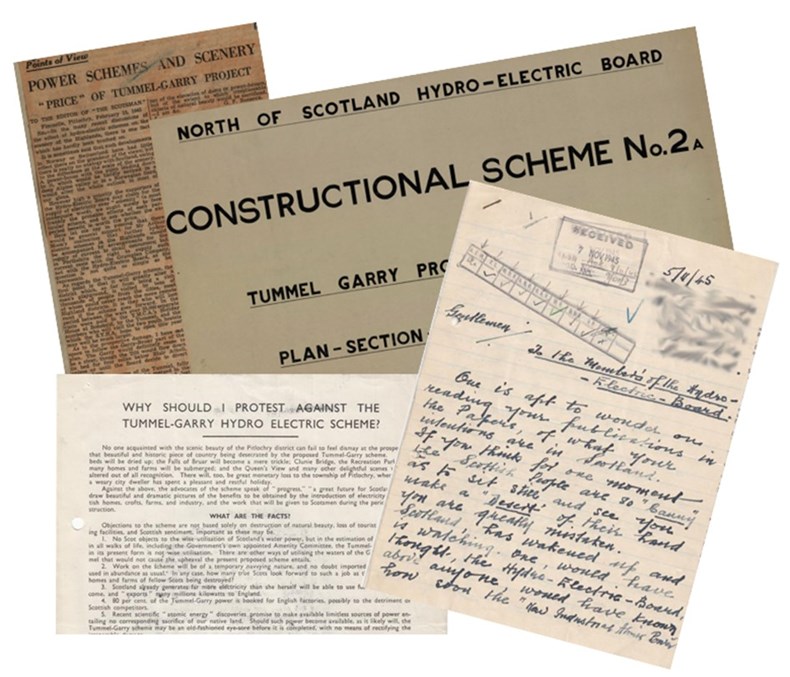 Constructional plans for the Tummel-Garry scheme were submitted in 1945 (second only to the Sloy scheme). Consisting of 9 power stations, 6 major dams, and 10 lochs and reservoirs it provides a total generating capacity of 240MW; and a storage capacity of nearly 162 GWh, which is enough to power 1 million households for around 7 days.

After a feisty 10-day public inquiry, permission was finally granted. Lord Airlie, NoSHEB’s Chairman was put under immense pressure during hours of bruising cross-examination. Deeply hurt by the attacks on the Board, and on himself, he decided to resign in favour of Tom Johnston, who was previously Secretary of State for Scotland, under Sir Winston Churchill.

Sir Edward MacColl, Deputy Chairman and Chief Engineer at the time had anticipated strong opposition to the scheme but felt that it was a challenge that had to be met head on.

However, plans for Pitlochry weren’t an immediate hit, with local media featuring the headline stating, ‘the building of a hydro-electric dam in Pitlochry would surely be the ruination of tourism within the town’. Opposition to construction was in fact so strong that there was only one hotel that would accommodate the surveying engineers during construction. 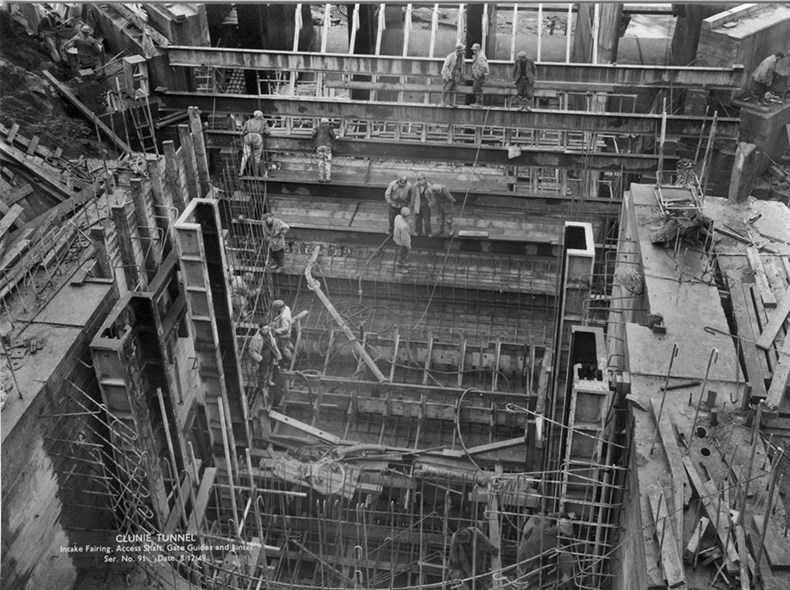 The construction on Clunie and Pitlochry sites was undertaken by George Wimpey and Co beginning in 1947 with works completing at the end of 1950. It was recorded in the 1948 NoSHEB annual report that approximately 1,200 men (including 47 Prisoners of War) were employed, including camp and canteen workers.

Workers were troubled with a lack of access to cigarettes due to local shops not receiving enough rations to support the camps, and reports record some left their job to work elsewhere with better access to provisions!

Even greater sorrow came at Clunie where an arch was erected as a permanent memorial to five men who lost their lives in a nearby tunnel due to a lightning strike prematurely detonating an explosive charge. 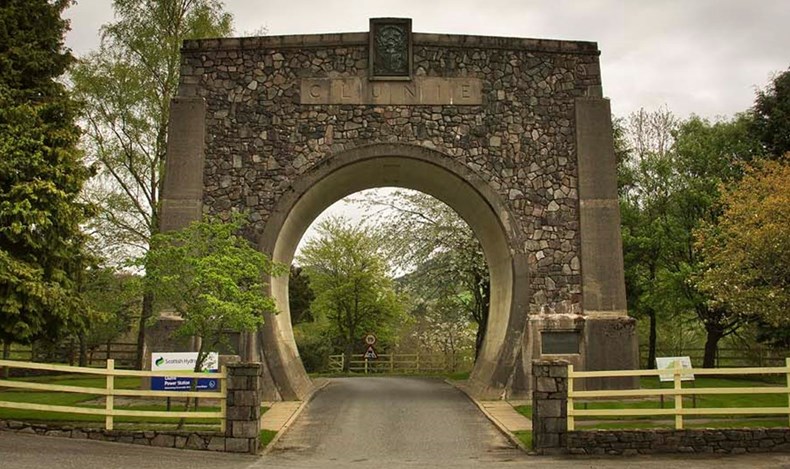 More tragedy struck when the official opening for Pitlochry dam – set to take place on the 16th June 1951 – was sadly called off due to the sudden death of Sir Edward MacColl, the night before. A more subdued memorial took place in early 1952 where a bronze plaque of MacColl was unveiled and is still to this day in situ outside the doors to our Corporate Archive at Pitlochry power station.

Over time it was realised that the Pitlochry Dam was in fact an asset to Scottish tourism , and a permanent exhibition was set up within Pitlochry power station in 1969, a far cry from today’s Pitlochry Dam Visitor Centre, but just as popular!   To this day it is amazing to see how many people flock to see the 310-metre-long fish ladder - a legacy left by Sir Edward who was a keen fisherman.

Today, Pitlochry continues to be  vitally important to the wider Tummel valley scheme. As the last dam and generating station in the cascade system,  it needs to have the capacity and flexibility to deal with all the water that ultimately comes down the valley. With a catchment area of over 1800km2 this means that during the winter months the drum gates at Pitlochry are used to pass excess water in a controlled manner at all times.

To keep our assets in optimum condition, there is a certain amount of maintenance required. Clunie power station last underwent major upgrades in 2008 and Pitlochry in 2000, now, after 21 years, it is now due some more TLC which is scheduled to take place in stages over the next few years.

Historically and operationally, we’re proud of the role both these sites continue to play to help support our drive in the transition to a zero-carbon future. We look forward to future generations being able to celebrate the 80th, 90th and 100th year milestones of these feats of 20th century engineering.

To mark the anniversary, we've produced a digital timeline (above) and virtual tour of Pitlochry Dam and Power Station. Why not take the tour below?