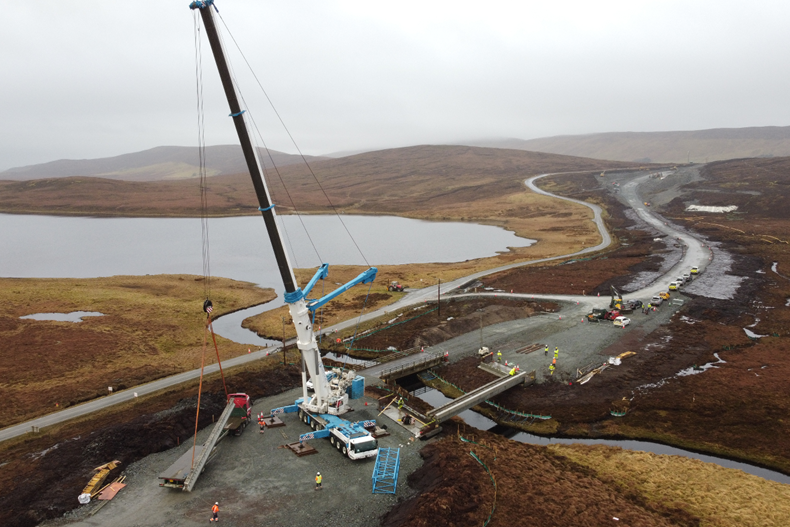 Lorries and other heavy vehicles involved in building Viking Wind Farm and SSE Transmission's HVDC Convertor Station at Kergord are moving over to a newly built road at Sandwater, easing traffic on Shetland's B9075 Sandwater Road.

The new double-track road has been built by RJ McLeod and local contractors from Shetland. It came into use last week following the placing of a temporary bridge over the Burn of Pettawater.

Meanwhile, a crane from Hugh Simpson Contractors, capable of lifting 500 tonnes has put in place concrete beams for a permanent bridge which will be completed for use in the next few months. For a short while, there will be three bridges in parallel across the burn until the temporary bridge is removed.R

Remedial work is also planned for the old road and brig, built in 1938, which have carried the increased heavy traffic since June last year when work began on building the Kergord access track.

Repairs were required to replace one of the old bridge parapets, while the other parapet is in line for repointing along with other minor work along the old road.

The new road will carry HGVs and most other construction-related traffic heading to and from the western and Mid Kame sections of the wind farm and the SSEN Transmission site at Upper Kergord.

Viking Wind Farm spokesman Aaron Priest said: “We’re pleased to see the new Sandwater Road reach this important initial milestone and to be able to move our construction traffic from the old B-road, which will now be tidied up.

"We would like to thank other road users for their patience over the past few months.”

For the first time on a public road in Shetland, a special lightweight aggregate has been used to help ensure the effectiveness of the floating sections. The Leca fill is made from fired natural clay and is 85% lighter than traditional road materials.

The new road will be tarred around the time that wind farm construction is completed in 2023/24 when it will be surfaced, white-lined and handed over to Shetland Islands Council for public use.

A short section of the old road by the loch is expected to be kept for recreational purposes at the request of the council and the Shetland Outdoor Access Forum.