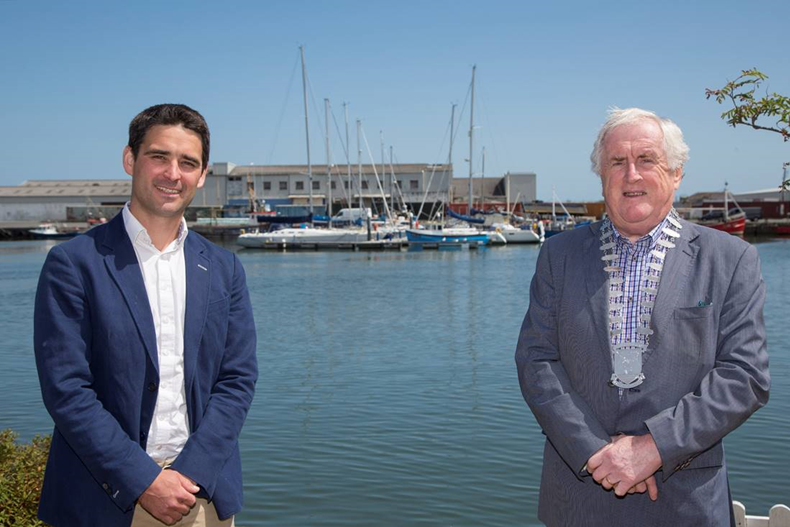 In a year in which record-breaking offshore wind strike prices were secured in the last contracts for difference auction, the UK and Scottish governments both legislated for net zero targets. The UK Government set out an ambition of 40GW of offshore wind by 2030 in their General Election Manifesto, recognising the role offshore wind will play in meeting these net-zero targets

The new base location at Arklow Harbour’s South Dock will operate as a hub for the new offshore wind farm and will be home to 80 full-time employees who will be recruited to work on its operation and maintenance. The facility will comprise new purpose-built office and warehouse buildings as well as adjacent quayside berthing for up to four crew transfer vessels. In addition, the development will support companies across the supply chain, including those involved in vessel services and site survey, hospitality, fuel, consultancy, logistics and stevedoring.

Today’s announcement follows a detailed assessment of facilities at both Wicklow Port and Arklow Harbour over the past year to identify the optimum site for the offshore wind farm’s future service base. This assessment included extensive consultation by SSE Renewables with existing marine users at each location, including commercial, fisheries and recreational interests.

SSE Renewables has entered into land option agreements at Arklow’s South Dock to progress the development. These include an option to purchase an industrial yard known locally as ‘The Old Shipyard’ on the harbour’s South Dock for the development of offices and warehousing. The company has also entered into option agreements to ‘step into’ two existing lease agreements with Wicklow County Council for adjoining industrial land which also forms part of ‘The Old Shipyard’ site, as well as an area of quayside at the South Dock for vessel berthing and pontoons.

SSE Renewables is significantly progressed in plans for the next phase of Arklow Bank Wind Park. It is targeting a delivery date of 2025 to meet Ireland’s interim target of 1GW of offshore wind energy in the same year, as committed to in the Irish Government’s Climate Action Plan. When complete, the wind farm is expected to power around half a million homes each year with green energy, offsetting around 600,000 tonnes of carbon emissions or a 1% reduction in Ireland’s annual carbon emissions.

“SSE Renewables’ announcement is a great vote of confidence for County Wicklow. This project will place Ireland well on its way towards achieving its objective of generating 70% of its energy from renewable sources by 2030. It provides great opportunities to build on County Wicklow’s maritime traditions by providing skilled employment opportunities, skills transfer, training and development, and spin off investment for both Wicklow and Arklow. This places us well on our way towards achieving our goal of developing County Wicklow as a Centre of Excellence for the Offshore Renewable Energy Sector.”

"SSE Renewables’ announcement is extremely positive news for Arklow and indeed Co. Wicklow. A project of this scale will contribute to a significant commercial uplift for the community as well as creating around 80 jobs. The Arklow Bank Wind Park will open up enormous socio-economic potential for County Wicklow as well as positioning the county as a leader in the wind energy sector.  I look forward to seeing the project develop in the coming years and becoming operational in 2025."

“We are delighted to confirm Arklow Harbour as the new home for our Operations and Maintenance Base for Arklow Bank Wind Park. The new base will play a vital role in the day-to-day running of the planned offshore wind farm. Around 80 full-time employees will be recruited in the coming years to work out of the base to operate and maintain the wind farm, ensuring we safely and reliably generate renewable energy to power half a million homes daily and meet Ireland’s carbon reduction targets.

“While Arklow’s South Dock has been selected as the preferred base location, both Wicklow Port and Arklow Harbour offer very attractive facilities for any offshore wind developer. We are very confident that both Wicklow and Arklow will see significant commercial uplift and urban regeneration as a result of the economic boost from our planned investment in the construction and operation of Arklow Bank Wind Park in the years ahead.

“I would like to thank Wicklow County Council which has been very progressive in its support of Ireland’s emerging offshore wind energy sector. As a result, County Wicklow is in pole position to become Ireland’s ‘Offshore Energy Centre of Excellence’. We greatly appreciate the support and advice of Wicklow County Council in progressing our plans for our entire project, and we look forward to working with the members and officials of the local authority to bring Arklow Bank Wind Park to fruition for the benefit of the entire county.”

“Today’s announcement by SSE Renewables is very positive news for County Wicklow. The Blue Economy is an important pillar in the county's economic development strategy. The development of Arklow Bank Wind Park and the decision to site the operations and maintenance base in Arklow will act as a catalyst for the regeneration and renewal of Arklow Harbour and indeed the entire town. This will dovetail with the development of the wastewater treatment plant, the flood defence scheme, and  other exciting developments announced by locally based companies, and will be transformative for the entire area.”

Following today’s announcement SSE Renewables will commence an extensive development programme to further progress delivery of the new Operations and Maintenance base. This includes entering discussions in the coming months with Wicklow County Council to agree updates to existing lease agreements as well as applying to the local authority in early 2021 for planning permission for the purpose-built complex.