Located in the North Sea, in the outer Firth of Forth, Berwick Bank and Marr Bank offshore wind developments have the potential to deliver around 3.2GW of installed capacity, making them Scotland’s largest offshore wind farms. 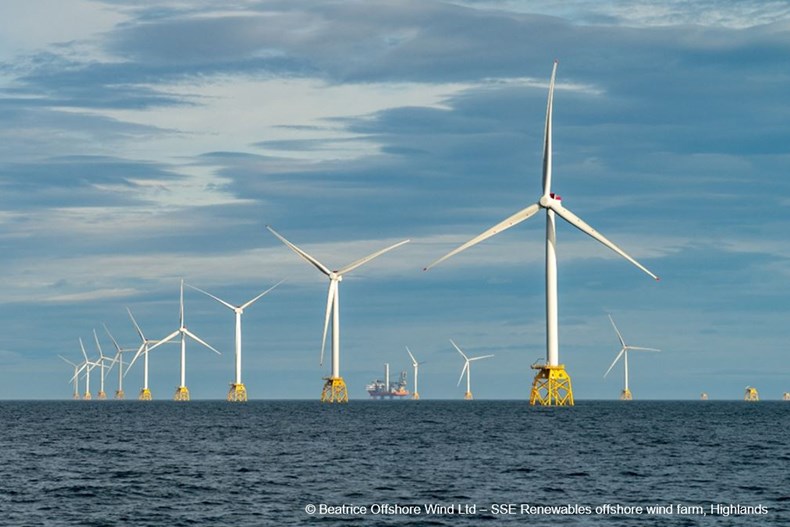 Berwick Bank wind farm and Marr Bank wind farm could bring a wealth of opportunity for businesses of all sizes across a wide range of disciplines and we are aiming to utilise as many local, Scottish and UK based suppliers where possible throughout all stages of development and operation.

If you have any questions about this project you can reach us on the contact details provided on this page.

SSE Renewables is adhering to the latest Scottish Government guidance in relation to Covid-19. The well-being of our employees, contractors and local communities is our number one priority.

Geophysical surveys, which map the seabed, have been completed for the main wind farm area. Aerial surveys, whereby a plane flies over the site to video the wind farm area, commenced in March 2019 and will continue until April 2021. The aerial surveys will collect bird and marine mammal density data. To understand the site wind and wave conditions a floating LiDAR (Light, Detection and Ranging) and three metocean buoys have been deployed. The floating LiDAR will collect wind speed and wind direction data. The metocean buoys will collect wave height data.

SSE Renewables has various surveys planned over 2020 and 2021, including onshore surveys such as environmental surveys, ground investigation, topographical, and transport access surveys. Offshore surveys to complete include the geotechnical investigation for the Berwick Bank wind farm and Marr Bank wind farm areas. We will also undertake benthic habitat surveys to understand the ecology of the seabed. Nearshore, an additional geophysical survey will be undertaken on landfall options.
SSER is taking a responsible approach to project development, engaging early with relevant stakeholders and listening to their views to help to inform the project.

We will take on board all Scottish Government advice on public engagement during the Covid-19 pandemic. We expect to host a series of virtual and, if guidance allows it in person, public consultation events in 2020 and 2021 to provide information and answer any questions on Berwick Bank wind farm and Marr Bank wind farm. It will also be an opportunity for Scottish companies to register their interest in helping support the successful delivery of this significant project for Scotland.

We are committed to communicating with and responding quickly to the needs, interests and concerns of local communities. To get involved and be kept informed of developments please contact us at:

1. How are SSER managing the risk of COVID-19?
Answer - SSE Renewables COVID-19 statement.

Answer - The cable landfall is yet to be confirmed for Berwick Bank wind farm and Marr Bank wind farm. Further information will be provided in the EIA scoping report, which will be available to download on this website when complete.

3. When will the Environmental Impact Assessment (EIA) scoping report be available to view?

4. When can I attend a public information event?

Answer - We expect to host a series of virtual and, if guidance allows it in person, public consultation events in 2020 and 2021 to provide information and answer any questions on Berwick Bank wind farm and Marr Bank wind farm. More details will be posted on this website as they become available.

Answer - We expect to submit the consent applications for Berwick Bank wind farm and Marr Bank wind farm in 2021. Please email us to register to your interest on the ‘contact us’ tab.

6. How can I support the project?

Answer - Please get in touch via the details in our contact us section and we’ll add you to our list to be kept up to date with all developments on the projects.

7. What role does East Lothian Council have in the consenting process?

Answer - East Lothian Council are the consenting body for the wind farm onshore infrastructure. They are also a consultee for the offshore wind farm consent applications to Marine Scotland.

The Onshore and Offshore Environmental Impact Assessment (EIA) Scoping Reports for the Berwick Bank Wind Farm project are being submitted in August 2020. The Offshore Scoping Report focuses on the offshore generation and transmission works and has been submitted to Marine Scotland (7 August) and can be viewed here. The Onshore Scoping Report focuses on the onshore transmission works and will be submitted to East Lothian Council (anticipated 14 August). Once submitted, this report will also be available for downloading here.

The reports summarise the proposed onshore and offshore works, a description of the known environmental baseline, identifies additional surveys or studies required to confirm the baseline, describes the proposed methodology of the assessment of effects, and determines what receptors and/or impacts can be scoped in and out of the EIA.

The diagram below shows the split in technical topics and proposed infrastructure between the two reports. 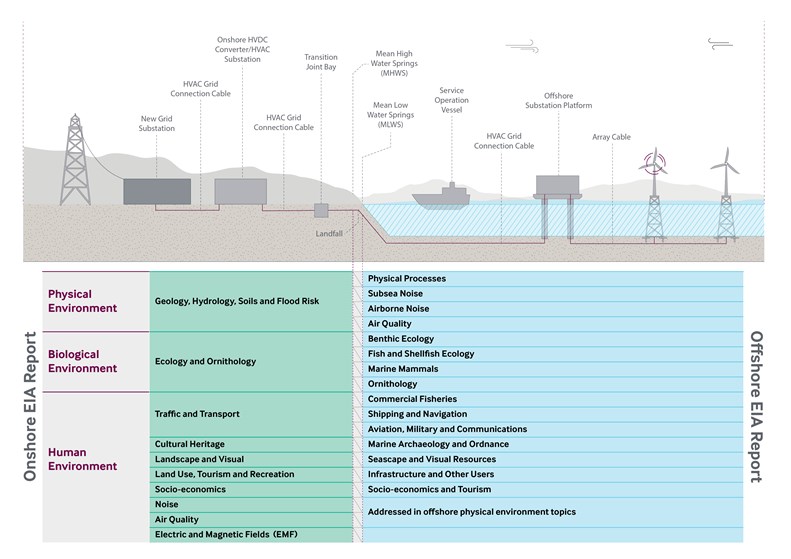 Public Exhibitions and Next Stage

Following the scoping submissions, an informal exhibition is anticipated to take place towards the end of this year and formal exhibitions are planned in early/mid 2021. The public will be invited to attend and comment. Next year, the Onshore and Offshore EIA Reports will be prepared. We will continue to follow Scottish Government and industry advice in relation to Covid-19 for public consultation and all EIA work.

Winds of change in the Firth of Forth

The two projects are located in the North Sea beyond the Firth of Forth. Berwick Bank sits 54km off the Angus coast at its closest point and Marr Bank sits over 43km off the coast.

The move to rename the projects is to distinguish the two standalone offshore wind farms from neighbouring project, Seagreen 1. All three Seagreen sites were awarded exclusive development rights by the Crown Estate in 2010 but are now progressing on separate tracks, with Seagreen 1 having reached a final investment decision in June 2020.

The new names are a nod to the geological history of each site, including the remains of the last glacial maximum, over 20,000 years ago. During this time, widespread movement of glaciers in the entire North Sea and, in particular, the area off the Firth of Forth, resulted in a thick layer of sediment being deposited. This sediment is historical evidence of the environmental change in this area.

Malcolm Grant, Lead Project Manager said: “Offshore wind is critical if both Scotland and the UK are to achieve net zero. The two wind farms will contribute significantly to carbon reduction targets and will help to drive forward a green recovery. We’re pleased to have renamed them to help distinguish them as separate sites in their own right.”

Berwick Bank and Marr Bank are both at the development stage of their projects. Berwick Bank could be operational as soon as 2027 with Marr Bank following slightly later timescales. Berwick Bank wind farm has secured a grid connection at Branxton, near Torness, in East Lothian.

Further information on the Berwick Bank and Marr Bank wind farm developments can be found by visiting sserenewables/berwickbankandmarrbank. 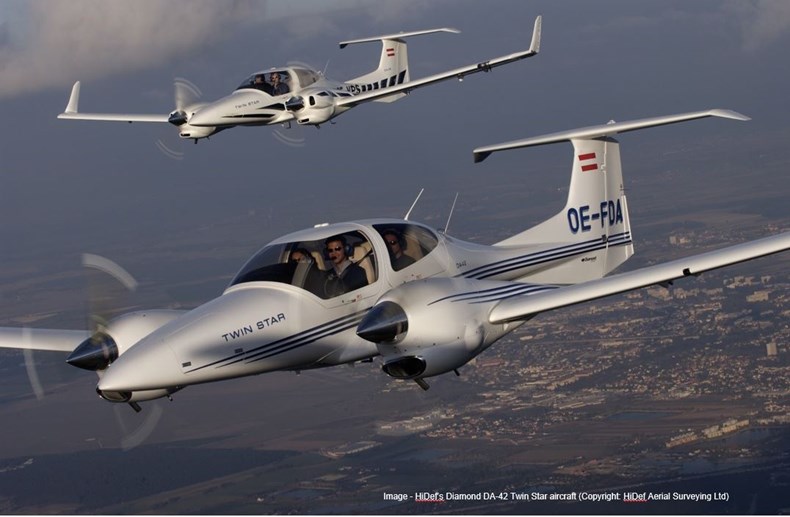 SSE Renewables contracted HiDef Aerial Surveying Ltd to complete what is believed to be the world’s largest single day marine aerial survey. Four aircraft are simultaneously used in a single day to survey SSE Renewable’s Berwick Bank wind farm and Marr Bank wind farm proposal sites off the Fife and Angus coasts at the mouth of the Firths of Forth and Tay. The survey site comprises 5000km2 of open seas and is surveyed by the aircraft following predetermined transects at an altitude of 550m to stop any disturbance to wildlife.

“It is a significant logistic exercise lining up four aircraft to do this work. Add in shortened day light hours in winter and we have had to utilise four aircraft at the same time to assist SSE Renewables. It sets a new bench mark for the renewables industry in terms of what is achieved in a single day” said Martin Scott Associate Director at HiDef. “We regularly undertake surveys with two aircraft, but this takes things to a new level”.

The aircraft are deployed with high definition video cameras that record ocean going birds and marine mammals, with the footage being reviewed later to build up a picture of what marine wildlife is present in the area and follow regulator guidance.

The geophysical campaign work, which began in 2019, is now complete for the main Berwick Bank wind farm and Marr Bank wind farm areas. The survey data collected has enabled mapping of seabed features and will feed into refining and optimising the development. 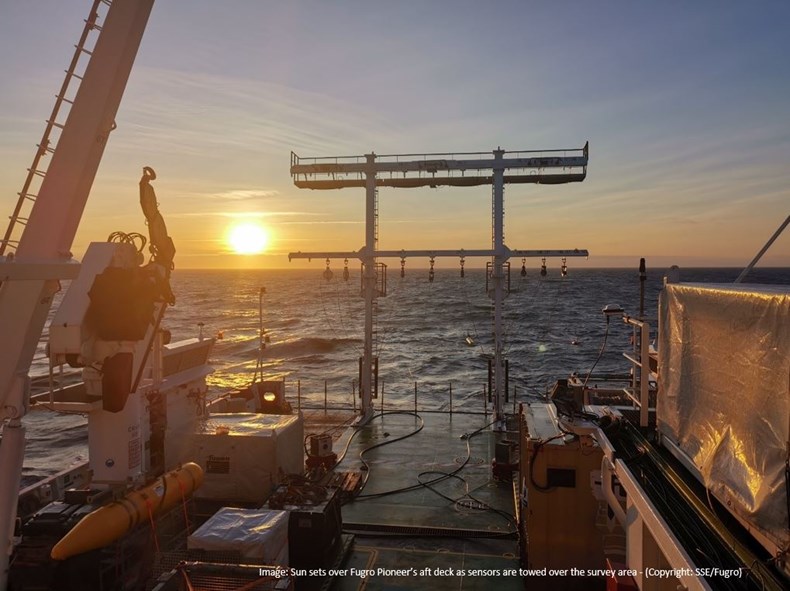