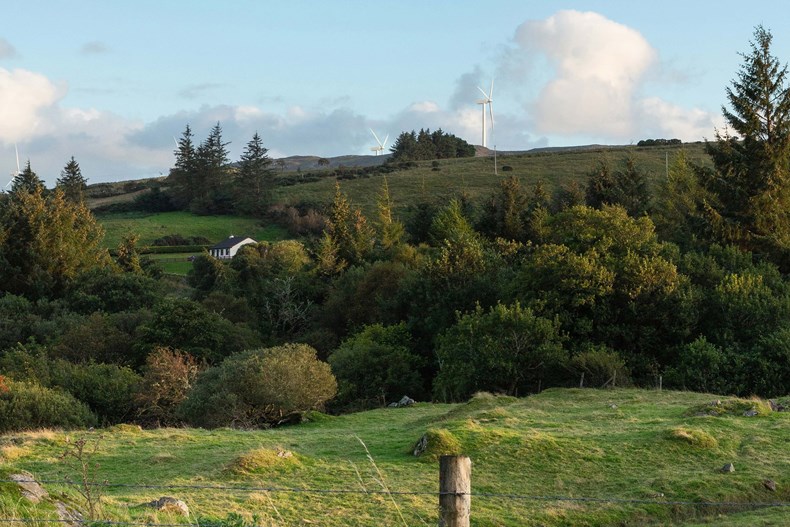 During construction, Drumnahough Wind Farm will generate approximately 60 jobs. Once operational the circa 60 MW wind farm will be capable of generating enough green energy to power around 40,000* homes and offset almost 40 million kilograms* of carbon emissions annually.

In addition to delivering significant energy security and climate action benefits for Ireland, Drumnahough Wind Farm will make a significant positive impact locally through the provision of a substantial Community Benefit Fund which will become available once the project enters commercial operation.

Drumnahough Wind Farm is a 50:50 co-development between SSE Renewables and FuturEnergy Ireland. Delivery of the Drumnahough Wind Farm project represents a joint total capital investment of around €60 million between the two development partners. This investment will help support County Donegal’s rural regeneration. SSE Renewables will lead on the construction of the project and will operate the wind farm on completion.

The project will also add to the development partners’ pipeline of projects in the North West where SSE Renewables and FuturEnergy Ireland are constructing the 30MW Lenalea Wind Farm near Letterkenny in central Donegal.

“We are delighted that the Drumnahough Wind Farm project has been successfully approved by An Bord Pleanála at the planning stage and will be able to start progressing onto the next stage. Delivery of Drumnahough Wind Farm will help boost Ireland’s energy independence and cut costs for the consumer by providing cheaper, more secure, homegrown energy for consumers. It will also make a significant contribution to Ireland’s ambitious renewable energy targets and efforts to reach net zero carbon emissions by 2050. Working with our co-development partners FuturEnergy Ireland and the communities in County Donegal we look forward to bringing to fruition the positive social and economic benefits that Drumnahough Wind Farm will deliver during its construction and its operational lifetime.”

“Receiving the positive planning determination for Drumnahough Wind Farm from An Bord Pleanála is a very strong validation of the high-quality application which was prepared in respect of this opportunity. The focus of the joint teams now shifts immediately to the grid and commercialisation modules, which the partners will use every effort to advance, particularly at a time of acute climate crisis. From FuturEnergy Ireland’s perspective, it brings us one step closer to achieving our stated ambition of generating 1GW of renewable electricity by 2030. In partnership with SSE Renewables, we are very much looking forward to seeing Drumnahough Wind Farm help Ireland leverage its unique wind resource, attain climate targets and increase the country’s energy security, all while providing a boost to the local economy and the community, without the support of whom this project would not be possible.”