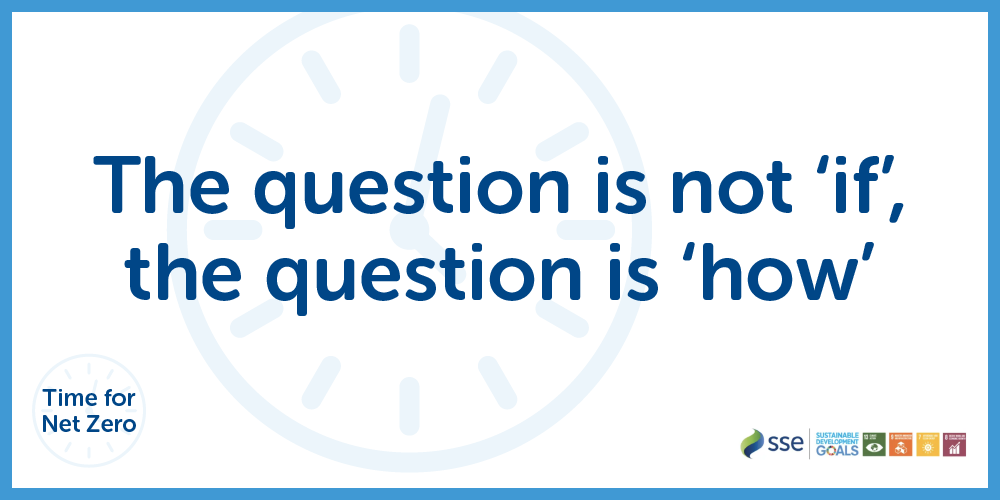 Today’s publication by the Climate Change Committee of its report on achieving a net zero GHG target is a landmark moment in the UK’s efforts to combat Climate Change. And it follows a series of key moments in the past few weeks: from David Attenborough’s precise documentary on the facts of climate change to the scale and impact of the climate change campaigners in London and elsewhere.

SSE strongly advocates for the UK to adopt a net zero target by 2050 at the latest if we truly want to combat climate change before it’s too late. That’s why SSE welcomes today’s report from the CCC. we fully agree that we must pursue an accelerated path to limit global warming to no more than 1.5 degree centigrade.

The question now, therefore, is not whether there should be a net zero carbon target, the question now must be, ‘how can we meet it?’.

The scale of the climate change crisis requires bold action. Back in 2007, SSE was a leading proponent, alongside the Climate Coalition, of tough legislation in the Climate Change Act to help deliver the UK’s transition to a low carbon economy. That Act of Parliament and the Electricity Market Reforms that followed have helped bring about a significant reduction in carbon emissions from electricity. SSE – on its own – has invested £11bn in renewable generation and supporting infrastructure since 2006.

What we know now is that we must go much further and much faster. And much wider than electricity.

SSE stands willing to play its part. While we met our 2020 carbon target early, we’ve set ourselves a new one for 2030: to half again the carbon intensity of the electricity we generate. We’ve also committed to trebling our electricity output from renewable sources. And we will connect more electric vehicles too.

What we need is for the UK Government to continue to take a bold, decisive, leadership position and implement an ambitious policy framework which can enable the scale of innovation and investment needed. We will need to build more renewables quickly, this means raising our ambitions in offshore wind, restarting onshore wind and pursuing a pro renewables policy framework. We also need to tackle heat emissions quickly and urgently, as well as drive forward policies for low carbon transport.

Net zero is certainly challenging but it can be done, with the right ambition, right policies, and right companies. Let’s do it.