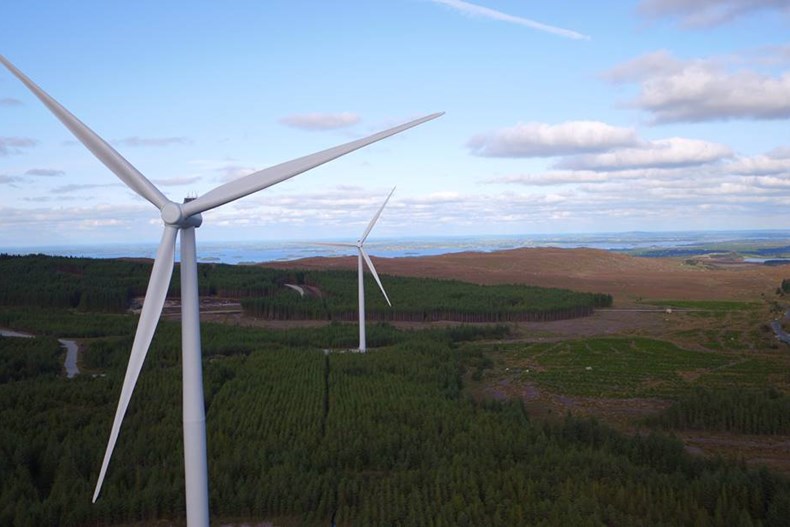 SSE has sold a 25% stake in the 108MW Cloosh Valley Wind Farm, part of the 174MW Galway Wind Parkin Connemara, Co. Galway, to its site co-owner Greencoat Renewables plc (“Greencoat Renewables”). The stake equates to 27MW (megawatts) of capacity and the total consideration is €34.5m representing the equity value of the transaction (excluding the external debt finance).

Cloosh Valley Wind Farm is co-owned by SSE and Greencoat Renewables and comprises 36 Siemens 3.0MW turbines with a combined capacity of 108MW. The site is contracted under Ireland’s REFIT 2 support regime until 2032 and project finance was put in place in December 2015.

Prior to the sale, both companies had a 50% stake in Cloosh Valley Wind Farm. This transaction now takes Greencoat Renewables’ ownership of the generation site to 75% per cent. SSE will continue to operate the wind farm and its retail arm in Ireland, SSE Airtricity, will continue to have the offtake of the green energy generated at the site.

This sale is another example of SSE creating value through stake sell-downs as it develops and builds more onshore and offshore wind farms, in line with its strategy to create value from the development and operation, as well as ownership, of assets.

The 174MW Galway Wind Park entered commercial operation in September 2017 and comprises 58-turbines in total, making it Ireland’s largest wind farm. Developed in two phases, Phase 1 (66MW) is fully-owned by SSE while the Phase 2 Cloosh Valley Wind Farm (108MW), which is the subject of this transaction, is co-owned by SSE and Greencoat Renewables. With the completion of this sale, SSE will own 93MW of the installed capacity at Galway Wind Park, representing a 53% ownership share of the total site.

“Galway Wind Park is a testament to SSE’s ability to design, develop, construct and operate first class renewable energy assets. Onshore wind makes a huge contribution to supplying low carbon electricity to Ireland’s all-island energy market and to meeting the country’s carbon reduction targets.  The sale of this stake in Cloosh Valley Wind Farm to our site co-owner Greencoat Renewables is a continuation of SSE’s longstanding approach of partnering with other renewable investors and securing value for shareholders at appropriate times.”

“We are very pleased to partner with SSE and to strengthen our relationship as co-owners of this asset at Ireland’s largest wind farm. We continue to see a strong pipeline of acquisition opportunities, for which our track record in execution and operations makes us an attractive partner for utilities looking to recycle capital.”